Cold open: Client crying, surrounded with other gym members who are pretending not to notice. You have been pulled out of your programmed bullhorn responses and are now forced to look at your client as a human and not as a time-slot filler. The industry has promoted the coach’s reaction to be along the lines of, “There’s no crying in baseball!”

While the validity of A League of their Own being an actual sports movie may be debated (see Tex’s “5 Reasons Sports Movies Fall Flat”), Jimmy Dugan‘s gut reaction to being forced to see his athlete as an actual human being is typical of an industry that pushes the “no days off” mentality. This is not the strategy most beneficial to the client or the coach’s business. It took Dugan until the end of the movie to redeem himself; we do not have that type of time.

Instead, think of the Tom Hanks from Forrest Gump, not the park bench but the jungle: Forrest and Bubba sitting back-to-back during a rainstorm so neither of them are forced to sleep on the ground. The coach and the client should be able to rely on one another during the rainstorm of outside stressors, so that neither the client’s health nor the coach’s livelihood will fall in the mud.

Whether it be social media or the  majority of certifying bodies, coaches today are  taught to copy exercises that are visually appealing or appear difficult and apply them to a population whose readiness is assumed. There are two categories: “special population” and “general population.” “Special population” are those with considerations based on recorded medical pre-existing conditions. “General population” is everyone else; that is a considerable amount of the pie chart to lump together in one group. The presumption that life stressors do not affect client resiliency is a dangerous mistake that must be remedied. The certification textbooks formulate anticipated client outcomes void of outside influence, but the actual strategy for the coach to train clients in the real world should be multifaceted: it must involve awareness, modifications and massive amounts of follow through.

The current rigid nature of exercise prescription is only exacerbated by the prospective client’s misinformed and unrealistic expectations. A coach is bombarded daily with client demands that resemble the chant of a mob, “What do we want? Results! When do we want them? Now!” The client hires the coach for a specific outcome. Every cookie cutter seminar, certification and workshop trains the coach to reverse engineer this goal to dictate the program for the client. However inconceivable, basing the initial program on the client’s end goal is the coach falling victim to a classic blunder. Clients have already been compromised by outside stressors, the wild goose chase for 6-pack abs or the ever elusive muscle “tone” bolsters an entire charlatan fitness/supplement industry. Misappropriately applying intensity to get these pie-in-the-sky goals is the most efficient way to not reach them.

So what is the solution to training a real person with stressors attacking their adaptation integrity from all sides? This riddle, wrapped in a mystery, inside of an enigma or twinkie? (Winston Churchill or Jerry Seinfeld respectively). Train the client for your goals for them, not theirs, at least temporarily. The coach’s goal should be to allow the fostering of athleticism regardless of the client’s goal.

By first training mastery of movement patterns to move efficiently and effortlessly through space, the client’s “fitness” goal (whether it be to look better naked or become the coveted class leaderboard champion) is now an achievable secondary concern. Holy awkward-locker-room-selfies Batman! That sounds authoritarian and counter to every training and business claim! We’ve been taught to give clients what they want to make sure they keep renewing their sessions! Insert Batman slapping Robin meme. No! If the client knew how to achieve their goal they would not be coming to you in the first place! Haphazardly prescribing exercises that the client thinks they want for fear of being fired is the quickest way to become unemployed. Champions play to win, they do not play to not lose. By training movement mastery initially, the client will be prepared to fully realize their own personal goal.

The client is an individual, but they are not special. Communicating this to the client is key; you are looking for a head nod in agreement, not a Dwayne Johnson eyebrow. It is very tempting to go into full Fight Club mode and tell the client that they are not a unique snowflake. They are not their Reeboks. Slightly more finesse is needed to communicate this idea. Everyone remembers the first rule of Fight Club, but no one remembers that Tyler Durden did not have to worry about hitting sales goals. The structure of “onboarding” a client must include the framework of principles that will follow the client through their full athletic life cycle.

The principle of Individualization in training includes a multistep process, one of which is often misrepresented for the sake of the sale – the assessment. There are multiple assessment tools that are used to create the illusion of expertise to an unsuspecting new client. Commercial gyms have shiny, expensive implements that are used as a magician’s kit to convince the client that the coach’s services are necessary. Effective coaching hinges on clear communication. A client must know that there is nothing up the coach’s sleeve. In reality, assessment is a daily process and the movement expressed by the client is directly affected by their outside stressors.

Chronic stress negatively affects performance; it interferes with the client’s capacity to adapt to both psychological and physiological performance task demands (Hancock and Warm, 1989). The effects of chronic stress on cognitive performance are characterized as a loss of attentional resources and working memory. Outside stressors cause a chronic stress response that not only affects recovery, but debilitates competency of performance. The theoretical Standard Capacity Model illustrates the coach’s challenge when taking on a new client. The concept can be more easily understood through the flowchart below. As the modern day Disney philosopher and the original visual learner Gaston once said, “How can you read this? There’s no pictures!” 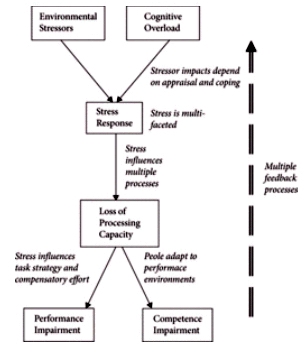 Coach beware: competency is a trigger word. If a potential client comes in looking to firm up and lose back fat, and instead they have a conversation about how they are incompetent, the reaction may not be ideal. Their reply could range from walking out to signing up immediately looking to show the coach that “No one puts Baby in the corner.” A crap shoot is not the best business model. Teaching the client unconscious competency in primal movement patterns is the goal for a coach that is looking to have injury-free, results-achieving clients. Modern day clients are stressed to the point that their ability to pay attention to their movement and the coach’s cues is weakened. Chronic stress impairs working memory, fine motor skills, judgment and dexterity (Matthews 2019). Pair that with the high intensity demands of the atmosphere most clients think that they want, and the recipe for disaster is on par with going to a minefield and executing double-time high-knees a la “Maniac” from Flashdance.

By teaching movement proficiency first, allowing the client to maintain posture and position under fatigue, they will be afforded more opportunities to train for their specific goal. If “orange is the new black” then “constantly varied” is the new “muscle confusion.” Random workouts not only do a disservice to a coach’s profession, but also neglects what the stressed client needs most – practice.

Practicing motor patterns increases movement economy and decreases levels of perceived exertion (Lay et al. 2002; Sparrow et al. 1999). Decreases in oxygen consumption and heart rate brought about with practice allow for increased movement stability and efficiency (Lay et al. 2002). Outside stressors reduce the client’s processing capacity, so a coach must ground their program in a template that allows for the practice of primal movement patterns (squat, lunge, step, horizontal push/pull and vertical push/pull) to have optimal and safe transfer of training to performance tasks.

Using the squat rack for actual squats instead of bicep curls will have a greater effect on the client’s long term goals. Communicating this delayed gratification to an overstressed client who has been imprinted with “fitness hashtag” aspirations is the coach’s dilemma. Give them what they want and they will see short-term gains but burnout quickly or give them what they need and build athleticism in a client that will allow them to achieve long-term success.

For a coach, the gym’s interval timer acts as a siren’s song, the temptation to have the client sweat blindly –  to push them to dangerously overestimated limits. One good workout does not a good program make. Designing a program for the client whose system is overrun with outside stressors is a level of frustration equivalent to trying to correctly arrange the different color variants of a blue sky in a jigsaw puzzle. Bending that last piece to make it fit so you can finally get the box off your dining room table is a relatable sentiment, but not an appropriate coaching strategy. So how do all the pieces fit? What is the template that will arm the coach to properly combat a client’s life stressors intrusion? Sit tight, the nuts and bolts of the programming strategy is coming in the series finale, character arcs will be resolved and plot points revealed. Dun dun dun! Stay tuned.

Starting his training career assisting in the Biomechanics lab at San Francisco State, Cheyne’s focus on movement, posture, and position have been the foundation of his coaching. His clientele ranges from injury rehabilitation patients to professional athletes, and he has been able to consistently tailor strength and conditioning programs toward specialized needs. As a personal trainer in commercial gyms from California to New York, his hands-on experience gives a unique perspective as to what will and what won’t work in the real world. Since graduating the Block One Coach curriculum in June 2018, Cheyne has utilized the Power Athlete Methodology for developing and fostering athleticism in his clients. Cheyne credits the Block One Coach curriculum for the improvement he has seen in his clients’ body composition, strength, endurance, fitness and overall aesthetics.